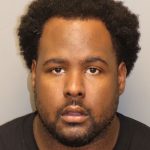 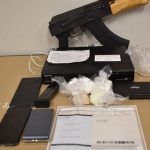 On Friday, October 1, 2021, Jefferson County Sheriff’s Deputies conducted a traffic stop in the Pratt City area, which lead to the seizure of a large amount of fentanyl and a handgun.  Due to the large quantities of fentanyl, deputies obtained a search warrant for the suspect’s residence in Pleasant Grove.

As a result of the search, Detectives from the Vice and Narcotics Unit and the FBI were able to retrieve over 207 grams of fentanyl, 27 grams of heroin and a large quantity of illegal pills.  They also recovered an AK-47 and handgun.

The suspect, 36-year-old Vincent Eugene Handy was arrested and placed in the Jefferson County Jail in Bessemer.  He is being held on 3 counts of drug trafficking, unlawful possession of controlled substances, carrying a pistol without a license and numerous other misdemeanor charges.  No bond has been set for his charges at this time.