Arrest Made in Convenience Store Shooting 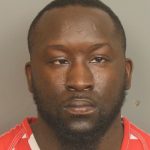 On Sunday, February 28, 2021, Wallderrick Pierce Carson of Centerpoint, contacted detectives at the Jefferson County Sheriff’s Office requesting to speak with them.  Detectives conducted an interview with Carson.  After that interview, it was determined that the 33 year old would be arrested and charged with the murder of 30 year old, Deandre Antone Carter.  Carson was booked into the Jefferson County Jail at approximately 4:00 PM on Sunday.  His bond is set at $50,000.