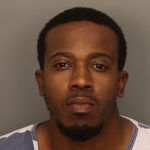 Jefferson County Sheriff’s Detectives have made an arrest in the May 31, 2021 shooting that occurred near Western Hills Mall in Fairfield.  Thirty seven year old Charles Porch was taken into custody late today and placed in the Jefferson County Jail.  Porch has been charged with 2 counts of attempted murder and shooting into an occupied vehicle.  His bonds total $135,000.

The investigation began after a deputy patrolling the area near Western Hills Mall heard multiple gunshots and then witnessed a vehicle leave the roadway and strike a tree.  When he went to check on the occupants, he found a male and a female inside who had both been shot.  The male is in critical condition at UAB hospital.  The female’s injuries were not life-threatening.  According to reports, there had been an argument between Porch and the two victims that lead the shooting.