Arrest Made in Fairfield Fatal Shooting 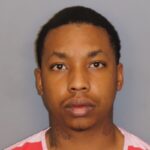 On December 1, 2020, Jefferson County Deputies were called to the 5600 block of EJ Oliver Boulevard to investigate a shooting that occurred around 10:30 AM.  The victim, 21 year old Tykeia Marquise Daniels was found at the location suffering from critical injuries.  Daniels was transported to UAB Hospital where he was pronounced dead.

After gathering evidence and speaking with the witnesses on the scene, detectives were able to establish a suspect in the shooting.  Within hours, 22 year old De’Andre Carrithers of Midfield was taken into custody.  Carrithers is charged with Capital Murder.  He also had a current outstanding warrant for Domestic Violence.  A bond has not yet been set for the Capital Murder charge.