Arrest Made in Fairfield Shooting 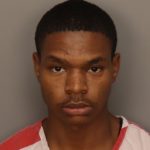 On Tuesday, June 16, 2020, Detectives made an arrest in the shooting of 42-yesr-old, Kencasiko Bryant.  On June 1, 2020, Mr. Bryant was found shot to death in his home.  His 2018 Gray Chevrolet Malibu was missing from the residence.  Detectives located the vehicle in the Ensley area.  Evidence found inside the vehicle led detectives to a possible suspect.  After interviewing the suspect, Detectives arrested 19-year-old Carterious Garcell Dees.  According to Dees statement, he had met the victim through a social media app and the two had agreed to meet.  Once at the victim’s home, a disagreement occurred and Dees shot and killed the victim.  Dees took the victim’s wallet and fled the scene in the victim’s vehicle.

Carterious Garcell Dees has been placed in the Jefferson County Jail on the charges of Murder and theft of property 1st degree.  His bonds total $110,000.