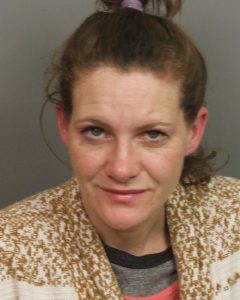 On Wednesday May 9, 2019 citizens from the Morgans Run subdivision in Bessemer provided video of a theft from their porch to the Jefferson County Sheriff’s Office which led to the arrest of 34 year old Amanda Nicole Ramos. Sheriff’s Deputies issued a BOLO (be on the lookout) for the suspect and vehicle. Patrol deputies were able to locate the vehicle and track down the offender. When Ramos was found she was in possession of several items of stolen property as well as drugs, digital scales, drug paraphernalia and the drivers licenses of other victim’s. Ramos admitted to stealing packages from porches and selling drugs.  Ramos told the detectives “Stealing things makes me feel good”.  Detectives recovered several items and packages that appear to be stolen and are trying to identify other victims. Ramos is being held in the Jefferson County jail on bonds totaling $46,000.00.  Current charges are Receiving Stolen Property 1st degree bond $20,000.00, Receiving Stolen Property 3rd degree bond $5000.00, Unlawful Distribution of Controlled Substances bond $10,000.00, Trafficking in Stolen Identities bond $10,000.00 and Possession of Drug Paraphernalia bond $1000.00. Ramos may face additional charges when other victims are identified.