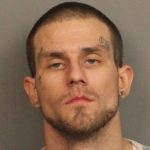 On January 1, 2023, Jefferson County Sheriff’s Deputies responded to a report of a copper theft at a church on 12th Court NW in Birmingham.  During the investigation, they were able to develop a suspect description as well as a suspect vehicle description.  Additional deputies were able to utilize flock cameras near Gadsden Highway to locate a vehicle matching the description of the suspect vehicle.  Deputies took 27-year-old, Bradley Hanel of Centerpoint, into custody for the theft.  During the course of their investigation, deputies discovered copper that appeared to have been cut from the HVAC Unit at the church.  They also found in Hanel’s possession multiple identification cards, credit cards, prescription medications that were not issued to him and burglary tools.

Hanel was transported to the Jefferson County Jail in Birmingham where he is being held on charges of trafficking in stolen identities, receiving stolen property 1st degree, theft 1st degree, criminal mischief 1st degree, possession of burglary tools, theft of property 2nd and 3rd degrees and possession of drug paraphernalia.  His bonds total $80,000.00.