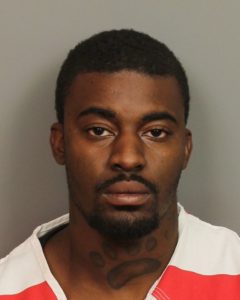 On Saturday September 14, 2019 at 12:15pm Jefferson County Deputies responded to a car theft in progress.  The victim called from a laundry business in the 1500 block of Center Point Parkway.  The victim reported that she sat her keys down inside the business while she was unloading clothes.  The car thief then took her key fob and stole her car.  The thief fled south on Center Point Parkway.  The vehicle was tracked to highway 459 where it was spotted by deputies.  Deputies attempted to stop the car but the thief accelerated and attempted to get away.  The car thief lost control of the car near the Liberty Park exit and crashed.  The car thief then exited the car and attempted to get away on foot.  Deputies chased and caught the thief.  The car thief has been identified as 26 year old Quintarius Cordell Mitchell.  Mitchell is charged with Theft of Property1st bond $25,000.00, Attempting to Elude bond $6000.00, Reckless Endangerment bond $6000.00 and Resisting Arrest bond $6000.00.