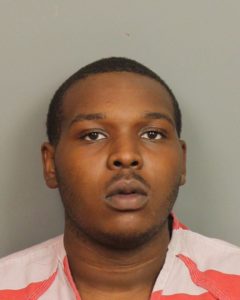 On Sunday August 11, 2019 at 4:54am 2 robbers approached 2 women as they were getting out of their vehicle in the 2300 block of Rain Tree Court in Center Point.  The robbers pointed a gun at them and took their personal items and their vehicle.  Deputies issued a BOLO (be on the lookout) for the robbers and the vehicle.  At 12:51pm deputies spotted the stolen vehicle and attempted to make a traffic stop on it.  The driver refused to stop and attempted to get away.  Deputies pursued the vehicle until 2 of the 3 occupants bailed out of it, with the car still in drive in the 200 block of Maple way.  Deputies were able to take 2 robbers into custody.  Deputies arrested 22 year old Justin Malik Carter and a 15 year old Juvenile.  Sheriff’s detectives expect to make additional arrest in this case.