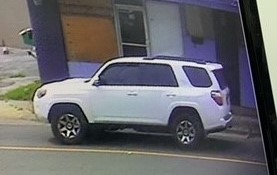 The Jefferson County Sheriff’s Office is asking for the public’s assistance in locating the suspect vehicle that was used in a homicide occurring around 3:10 PM on Saturday, May 9, 2021 near 311 Valley Road in Fairfield.  A person inside of the pictured vehicle, which appears to be a white Toyota 4 Runner, opened fire on a black Dodge Charger, in which 31 year old Douglas Crenshaw was a passenger.  Crenshaw was struck by the gunfire and died from his injuries.

According to the video evidence of the shooting, there was also a black Chevy Traverse traveling behind the victim’s vehicle when the shooting occurred.  Detectives would like to speak with the occupants of the Traverse in relation to what they saw.