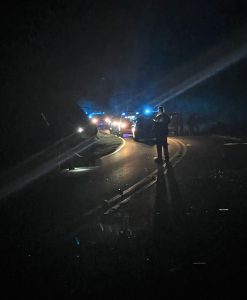 Around 5:45 PM on Wednesday, September 21, 2022, deputies from the Jefferson County Sheriff’s Office were dispatched to the intersection of Corner School Road at Bankston Road to investigate a head-on collision at this location.  Upon arrival, it was discovered that a Dodge Magnum and a Nissan Rogue had collided head-on resulting in three victims.  The driver of each vehicle, a 59-year-female and a 38-year-old male, was pronounced dead by medical personnel who responded to the scene.  A ten-year-old boy was injured and is recovering from minor injuries.

The Jefferson County Sheriff’s Traffic Reconstruction Team is on scene conducting the investigation into the cause and circumstances surrounding the crash.  The identities of the deceased victims are not yet being released.