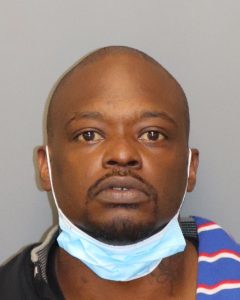 On Saturday October 29, 2022, at 5:31pm Jefferson County Deputies were dispatched to investigate a shooting at a hotel on Kelco Place in Fairfield.  Deputies arrived and found a 30-year-old woman suffering from a gunshot wound.  Witnesses report that the woman argued with a man and tried to get away from him when he pulled a gun and shot her.  The man was later identified as 38-year-old Cortney Dion Price.  After shooting the victim, Price then fled on foot.  The victim was treated for her wounds, but she did not survive.

Price later emerged on Seminole road in Fairfield around 6:39pm and took a vehicle from a family at gun point.  At approximately 6:43pm a bicyclist was struck on nearby Grasselli road by a vehicle that fled the scene.  The bicyclist died on the scene.

Deputies spotted the stolen vehicle near Erie Street in Birmingham.  After a brief pursuit, Cortney Dion Price wrecked the vehicle and was taken into custody.  Price is being held at the Jefferson County Jail in Bessemer.  Price is charged with Murder and no bond has been assigned.  Additional charges are pending.