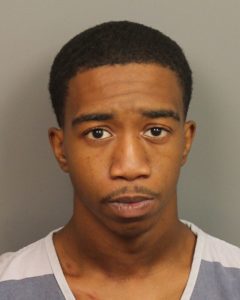 On Friday August 16, 2019 at approximately 8:25am an alert deputy spotted a vehicle that had been reported stolen in the parking lot of a convenience store on Roebuck Dr. That vehicle had also been used in a string of car burglaries in the area. The driver of the vehicle attempted to flee and led deputies on a chase that ended when he wrecked the vehicle and bailed out. The driver then fled on foot through the Zion City Community. The citizens reported his direction of travel. Sheriff’s Deputies and Birmingham Police Officers set up a perimeter and was able to keep him boxed in a small area until our K9 units could arrive. The K9 dogs tracked the man to a car wash and deputies found him attempting to change clothes. The man was identified as 18-year-old Nicholas Maurice Simmons. Simmons was charged with Attempting to elude, Reckless Endangerment, Tampering with Physical evidence, Receiving Stolen property 1 and Unlawfully Carrying a Pistol. Simmons bonds total $34,000.00. Two men who tried to assist Simmons in avoiding capture were also arrested and charged with Interfering with Government Operations.