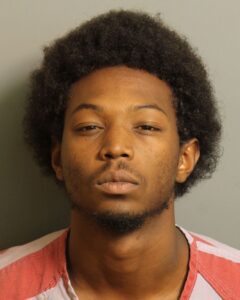 On Friday afternoon, September 25, 2020, Jefferson County Sheriff’s Deputies were able to take a suspect who had been on a crime spree since Wednesday evening, with the victims being his family and friends.

On Wednesday, September 23, 2020, a gun was reported stolen to Birmingham Police Department by a family member of the eventually arrested suspect.  The victim reported that the offender was her 25 year old cousin, Darius Donnell Bennett.  Then on Thursday, September 24, 2020, Jefferson County Deputies responded to the 2000 block of 6th Street NE in Centerpoint in response to Bennett going to another family member’s home and firing shots at them.  Bennett fled from the home before deputies arrived at the scene.

At around 5AM on September 25, 2020, Bennett returned to the 2000 block of 6th Street NE, this time focusing on a neighbor as his victim.  Bennett reportedly smashed in the victim’s kitchen window, armed with a knife and a hand gun.  When the victim saw the offender, she attempted to flee the home, but Bennett grabbed her and started beating her in the head.  He then drug the victim back into the home.  Bennett then took the victim’s car keys and debit card and forced the victim into her car.  He drove to the victim to her bank and forced her to withdraw cash from the ATM.  Bennett then drove the victim back to her home, dropped her off and left in her car, taking her cell phone before he left.

At approximately 2:30PM, deputies received another call from other member’s of Bennett’s family, stating that he had fired shots at them.  Deputies arrived at the 1800 block of Bond Way NE, but Bennett had already fled the scene.  Deputies began an extensive search for Bennett and were able to take him into custody near Polly Reed Road in Centerpoint.