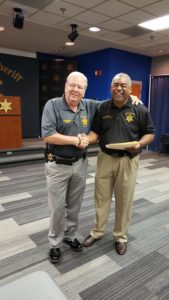 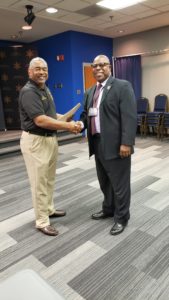 The Jefferson County Sheriff’s Office is celebrating the promotions of nine members of the command staff.  The Sheriff’s Office now has 4 new Deputy Chiefs and 5 new Captains.  Sheriff Pettway addressed the newly promoted staff and thanked them for their years of hard work and service.  Those promoted to the rank of Deputy Chief are: Deputy Chief Anthony Pippen, Deputy Chief David Agee, Deputy Chief Charles Buchannon and Deputy Chief Mark Farley.  Those promoted to the rank of Captain are: Captain John Weatherly, Captain Andrea Knight, Captain John Mayes, Captain George Ponder and Captain Wendell Major.  The newly appointed personnel were notified today September 6, 2019.  The promotions are effective September 7, 2019.  Sheriff Pettway said “I trust that they will be a tremendous asset in their new positions”.

These new commanders will be formally introduced at the next graduation ceremony of the Sheriff’s Training Academy on September 17, 2019.