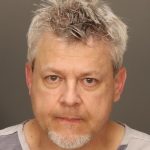 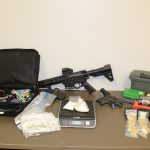 On Tuesday, July 14, 2020, Jefferson County Sheriff’s Office Vice and Narcotics Detectives executed a search warrant in the 2200 Block of Abbyglen Circle in Hoover.  The residence was occupied by Robert Alan Ozment.  This is the second arrest of Ozment where large amounts of narcotics were seized.  In March of 2020, Ozment was arrested with 2.5 lbs of Methamphetamines and a large amount of cash.

During this search, detectives recovered 6.41 grams of Cocaine, 5 ounces of methamphetamine, 14 suboxone strips, 15 alprazolam pills, 2 firearms and over $3000 in cash.  In addition, 9 gold bars, a 2009 BMW and other miscellaneous items were seized during the search.

47-year-old Robert Alan Ozment is being held in the Jefferson County Jail on charges of Trafficking Narcotics.  He has no bond at this time.