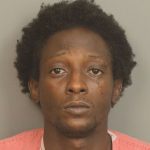 At approximately 4:52 on Monday, April 12, 2021, Jefferson County Sheriff’s Deputies were dispatched to the 1100 block of Florentine Circle in East Jefferson County to investigate reports of shots being fired.  Shortly afterwards, Deputies were alerted that the driver of a white Cadillac sedan had flagged down Birmingham authorities and advised them that they had been the target of the shooting at Florentine Circle and a passenger in the vehicle had been struck.

According to witnesses, 31 year old Andre Lawrence was at the apartment complex waiting for a ride, when the suspect arrived at the location.  The victim and the suspect were acquainted through relationships with a female witness.  When the suspect saw the victim, he produced a gun and fired at the Cadillac as the victim attempted to leave with the two additional witnesses.  One of the shots struck and killed the victim.

After interviewing witnesses, 27 year old Tarrell Reishon McCarter-Craig was taken into custody and charged with Murder.  His charge carries a $50,000 bond.