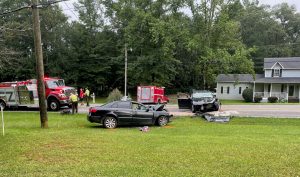 Shortly after 7:00 AM on Tuesday, July 20, 2021, Jefferson County Sheriff’s Deputies were notified of a head-on collision that occurred in the 6500 block of Old Tuscaloosa Highway, near McAshan Ridge Road.  The caller reported that two sedans had hit head-on.  One of the vehicles was occupied by a female who was pronounced dead at the scene.  The occupants of the second vehicle, a male and a female, were transported by ambulance to a local hospital with what appears to be non-life-threatening injuries.

Jefferson County START Detectives have been called to the scene and will continue to investigate the circumstances surrounding the collision.