One in Custody After Vehicle Pursuit in Warrior 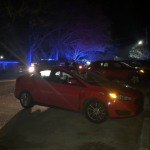 The Jefferson County Sheriff’s Office was called to assist with an investigation after a vehicle pursuit in Warrior resulted in shots being fired.  At approximately 2:00 AM on Tuesday, April 13, 2021, an officer with the Warrior Police Department attempted to perform a traffic stop on a vehicle traveling at a high rate of speed on Main Street in Warrior.  The driver of the refused to stop and continued on Warrior Trafford Road towards the city of Trafford.  An officer with the Trafford Police Department heard the direction of travel, blocked the roadway with his patrol unit and stepped out of his vehicle.  Upon reaching the blocked roadway, the suspect vehicle failed to stop and struck the patrol vehicle.  The vehicle then continued on towards the officer who was standing nearby.  The Trafford officer fired several shots in an attempt to disable the vehicle as it was traveling toward him.

The suspect continued on to an apartment complex at Faucett Drive in Trafford.  Once he arrived at the complex, the driver exited the vehicle and fled into an apartment where officers were able to take him into custody without injury or incident.

The driver has been identified as 19 year old, Cornelius Abodur Brownlee, Jr.  Charges against Brownlee are pending completion of this investigation.