One Killed and One Injured in Automobile Accident 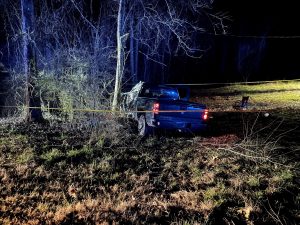 Around 9:45 PM on Sunday, January 30, 2022, Jefferson County Deputies were advised of an automobile accident involving a pickup truck that had left the roadway in the 1700 block of Alliance Road in western Jefferson County.  The truck was occupied by two males.  The 47 year-old passenger was transported to the hospital with what is believed to be non-life-threatening injuries.  The 57 year-old driver was pronounced dead on the scene by medical personnel.

According to reports, the truck left the roadway and struck a group of trees.  It is believed that the driver may have suffered some type of medical emergency.

The Jefferson County Sheriff’s Office’s START Team is conducting an investigation into the circumstances surrounding the crash.