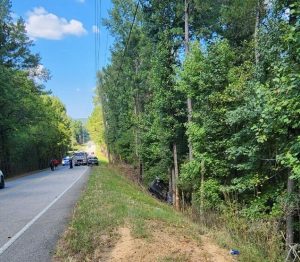 Around noon today, Jefferson County Sheriff’s Deputies were called to the intersection of Toadvine Road and Fields Road, in the Oak Grove Community, to investigate a single vehicle accident.  Once at the scene, deputies encountered a blue pickup truck that had left the roadway, struck multiple trees and came to a rest in a ditch.  The driver of the truck, a younger appearing male, was pronounced dead at the scene by medical personnel.  Positive identification of the victim has not yet been made.  Detectives from the Jefferson County Sheriff’s Traffic Reinforcement Team are investigating the circumstances surrounding the accident and the Jefferson County Coroner’s Office will investigate the cause of death and make a positive identification.