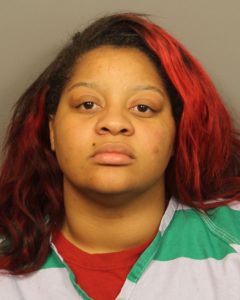 On Thursday October 3, 2019 at 2:26pm Jefferson County Deputies were dispatched to the 300 block of 52nd Street in Fairfield to investigate a report of a stabbing.  Deputies arrived and found a black male deceased on the scene.  Detectives have determined that the mans death resulted from an argument with a woman that he had a domestic relationship with.  During the argument the man was stabbed and died from his wounds.  28 year old Jammie Hughes has been charged with his murder.  Jammie Hughes was transported to the Jefferson County jail in Bessemer and held on $100,000.00 bond.  .