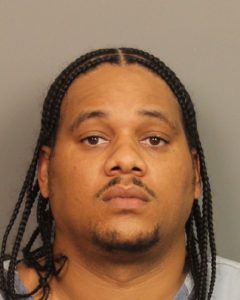 The Vice and Narcotics unit of the Jefferson County Sheriff’s Office has arrested a major Drug Trafficker in the Birmingham area.  After a 2 year investigation, investigators have arrested 34 year old Rolando Antwain Williamson for Drug Trafficking.  Investigators served a search warrant on a residence in the 1800 block of Arlington Avenue in Bessemer, Alabama.  Investigators recovered approximately 100 pounds of marijuana, 133 grams of heroin, 540 grams of methamphetamines and 112 grams of cocaine.  Investigators also served a search warrant at an apartment on Oaks Drive in Homewood, Alabama.  At that location investigators recovered approximately 50 pounds of marijuana, 130 grams of heroin and numerous handguns and rifles.  Williamson was arrested on August 22, 2019 and Charged with Drug Trafficking.  Williamson faces charges in the Birmingham and Bessemer divisions of Jefferson County.  Williamsons bonds total over $2,000,000.00 with more charges pending.