Shooting in Fairfield Leaves Four Injured and One Dead 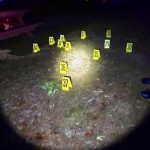 At approximately 7:45 PM on Tuesday, April 27, 2021, Jefferson County Sheriff’s Deputies were dispatched to the 200 block of Glen Crest Drive to investigate reports of shots fired.  Upon arrival they discovered 4 male victims who had received injuries due to gunfire and an additional male was deceased at the scene.  According to witnesses, the victims were congregating at the location, when a vehicle passed by and fired shots at them from a high powered weapon. Four of the victims were transported to UAB Hospital.  Their conditions are unknown at this time.

Jefferson County Detectives are continuing the investigation into the shooting and are asking for the public’s assistance in providing information.  You may also call Crime Stoppers at 205-254-7777.