Shooting in Fairfield Leaves One Dead 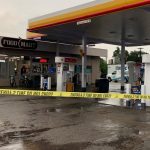 At approximately 4:52 PM on Monday, July 19, 2021, the Jefferson County Sheriff’s Office was dispatched to the 3600 block of Lloyd Noland Parkway to investigate the call of a person who had been shot.  Upon arrival, deputies found a currently unidentified black male who had been shot.  The victim was pronounced dead at the scene.

Detectives are currently conducting interviews and collecting evidence.  There is no suspect in custody at this time.  If you have any information regarding this shooting, we are asking that you contact the Jefferson County Sheriff’s Office at 205-325-1450, or online at www.jeffcosheriffal.com.  You may also contact Crime Stoppers at 205-254-7777.