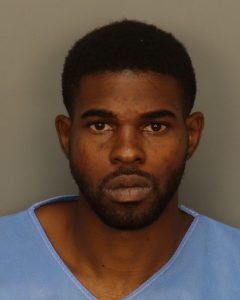 At approximately 4:30 AM on Thursday, July 23, 2020, Deputies were dispatched to a call in the 600 Block of Elm Street SW, where the victim was whispering to send help, someone was trying to kill her.  Deputies arrived on the scene moments later at the residence to find the victim running out the front door.  Deputies told her to come on out the door and got her to safety.  She advised that there was an unknown subject in her home and he had a gun.  Seconds later, the suspect appeared in the front door and pointed a rifle at a Deputy.  The Deputy fired at the subject, who quickly retreated back into the home.  The suspect fled out a back window of the residence, leaving a blood trail.

Deputies worked with neighboring agencies to track down the suspect.  Bessemer Police located the suspect at a grocery store on 4th Avenue.  Jefferson County Sheriff’s Office took 26-year-old Dai Qwane Rickey Burgin-Goodson (aka Rickey Burgin) into custody.  After the suspect was treated at a local hospital for his gunshot wound and other injuries he incurred during his escape from the home, he was transported to the Jefferson County Jail in Bessemer.  Burgin-Goodson is being held on the charges of Burglary 1st Degree, Rape 1st Degree and Assault 1st Degree.  There is no bond on these charges.  The subject was  released from Alabama Department of Corrections in May of this year.  His probation on those charges was revoked earlier today.  He now has 3 probation revocation warrants on the charges of Burglary 1st and Robbery 1st in addition to his new charges.  Burgin is a registered sex-offender.  He has been compliant with his registration.

On June 30, 2021, we were made aware of allegations of Sexual Abuse against a former Jefferson County Deputy Sheriff.  After a thorough...

END_OF_DOCUMENT_TOKEN_TO_BE_REPLACED

On July 25, 2021 at approximately 2:35 PM, Jefferson County deputies were dispatched to the 5000 block of Mud Creek Road in Adger to investigate...