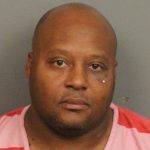 Suspect Henry Edward Freeman was taken into custody earlier today and booked into the Jefferson County Jail in Birmingham at approximately 11:25 AM.  Freeman is being charged with Capital Murder in the shooting death of his son, 29-year-old, Dandrei Freeman on Sunday night.  Freeman was taken into custody at another family member’s residence in the 100 block of 62nd Street in Fairfield.  He currently has no bond.