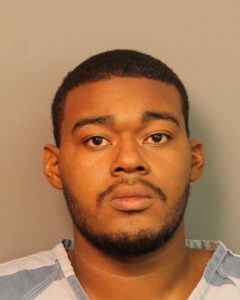 On November 17, 2020 at approximately 3:30 PM, Jefferson County Deputies were in the Robinwood area when they observed a vehicle parked in an unusual location.  When they approached the vehicle to investigate further, the vehicle fled the scene at a high rate of speed.  The driver of the vehicle appeared to be live streaming throughout the chase on social media. The driver apparently was not paying attention and collided with another vehicle at the intersection of Highway 79 and Pine Hill Road.

The driver, 24 year old Derrick Glen Ray, Jr. was taken into custody at the location of the crash.  He is being held in the Jefferson County Jail on charges of Unlawful Possession of Controlled Substances, Unlawful Possession of Drug Paraphernalia, Attempting to Elude and Reckless Endangerment.  His bonds are set at $35,000.