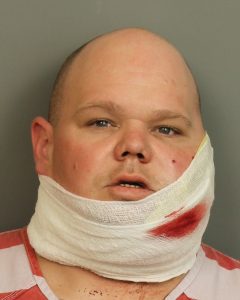 At approximately 8:30 PM on Thursday, September 2, 2021, Jefferson County Deputies were dispatched to the 2000 block of Paradise Valley Road in unincorporated Jefferson County to investigate a report of two people shot.  As the deputies investigated the shooting, it was discovered that a man had come to that location demanding to borrow some tools.  He became angry when the victim declined his request, but left the home.  A short time later, the man returned with a pistol in his hand.  The victim retrieved a shotgun and when the man raised the pistol, the victim fired the shotgun.  The man was struck in the face.  He began randomly firing the pistol and struck the victim and another person at the location.  All 3 of the subjects were transported to UAB for treatment of their injuries.  None were life-threatening.

At 2:05 AM this morning, 32-year-old Brandon Scott Swack was booked into the Jefferson County Jail on charges of attempted murder, theft of property 1st degree and criminal mischief 1st degree.  His bonds total $60,000.