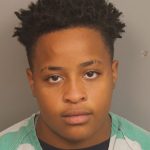 On Friday, June 18, 2021, Jefferson County Sheriff’s Detectives identified and arrested a suspect for the murder of 27 year old Jon Paul Matthew Kimber.  Kimber was discovered by a passerby lying in the roadway near Gary Avenue and 49th Street in Fairfield shortly after 10:00 PM on June 16, 2021.

After reviewing evidence, Detectives were able to identify 18 year old Joydan Ja’niece Blackwell as one of the suspects in the murder.  She is accused of attempting to rob the victim of his vehicle.  When the victim attempted to fight back, he was shot multiple times.  The victim and the suspects were aquainted with each other.

Blackwell is being charged with Capital Murder, Theft of Property 1st Degree, Shooting into an Occupied Building and Robbery 1st Degree.  Her bonds total $120,000 on all charges except the Capital Murder charge, which has no bond.

Additional arrests are expected in this case.