Warrants Issued in Deadly Shooting of 17-Year Old in Centerpoint 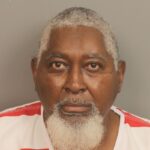 Jefferson County Sheriff’s Detectives obtained warrants in the February 4, 2021 shooting of a 17-year-old victim.  The shooting occurred after an altercation began at a family gathering in the 300 block of 19th Court NE in Centerpoint.  After conferring with the Jefferson County District Attorney’s Office, detectives obtained warrants for Manslaughter against 66-year-old, Curtis Williams of Birmingham.  Williams has been released on a $30,000 bond.  The victim and Williams were not directly related.