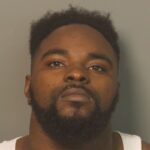 Jefferson County Sheriff’s Detectives have obtained warrants for the charge of Capital Murder against 27 year old Antonio Nichols, II.  Nichols is accused the in the November 9th, 2020 shooting of 18 year old Ja’Mari Demetrius Harris.  Harris was discovered in the parking lot of Park Brook Apartments suffering from a gun shot wound.  That wound was ultimately fatal.

Nichols, who is currently at large, is described as a 6’0″ tall, black male and he weighs approximately 200 lbs.  If you have any information on the whereabouts of Antonio Nichols, II, please contact Crime Stoppers at 205-254-7777.