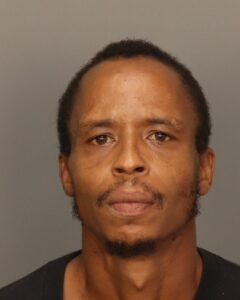 On Thursday September 3, 2020 at 4:06 pm, an alert patrol deputy driving on Gary Avenue near Valley Road in Fairfield observed a man beating a woman in the parking lot of a convenience store.  As the deputy approached he observed that the woman was unconscious and the man was stomping on her face, head and stomach.  The man saw the deputy approaching and attempted to flee the scene.  Despite being tased the man jumped into a car and fled the scene.  The deputy and witnesses gave medical attention to the woman until paramedics arrived.  Patrol deputies located the vehicle and saw the man nearby walking away.  Deputies were able to subdue the man and take him into custody.  The man was then identified as 39 year old James Michael Bell.  The victim was identified as a 61 year old woman who may be related to the offender.  James Bell said that he was angry at something the woman said to him.  James Michael Bell is charged with Aggravated Assault, Resisting Arrest, Attempting to Elude, Disorderly Conduct and Failure to Possess Felon Registration Card.  Bell’s bonds total $9200.00.