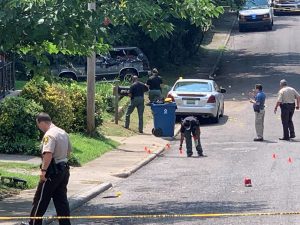 Shortly before noon on Wednesday, August 4, 2021, the Jefferson County Sheriff’s Office received multiple calls regarding shots fired in the 400 block of 57th Street in Fairfield. Callers also advised that there were 2 male victims that had been struck by gunfire but were transported to the hospital by personal vehicle.  Calls were later received advising that the 2 victims had arrived at Princeton Hospital for treatment of their injuries.  Their condition is currently unknown.  Deputies have located no additional victims, nor any suspects at the scene.  Jefferson County Sheriff’s Detectives are still on the scene continuing the investigation.

We are asking if you have any information regarding this shooting, that you please contact Crime Stoppers at 205-254-7777 or you may contact the Jefferson County Sheriff’s Office at 205-325-1450.

At approximately 2:15 AM on Sunday, September 12, 2021, Jefferson County Deputies were dispatched to the 200 block of 18th Avenue Northwest to...

END_OF_DOCUMENT_TOKEN_TO_BE_REPLACED

Shortly after 1:00 AM today, Jefferson County Sheriff's Deputies were dispatched to the 500 block of Osceola Drive in Fairfield to investigate a...

END_OF_DOCUMENT_TOKEN_TO_BE_REPLACED

Woman Arrested for Assault on Schoolbus

At approximately 7:18 AM on Tuesday, September 14, 2021, Jefferson County deputies were dispatched to the 1800 block of Martinique Drive in Center...